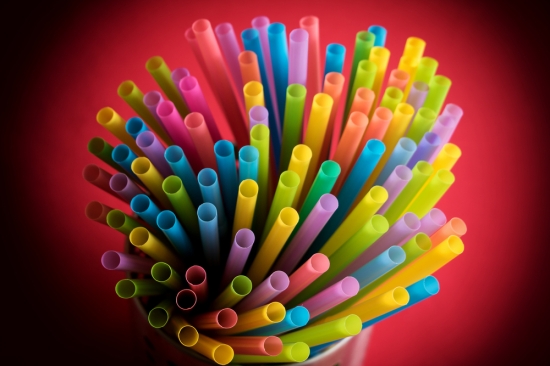 Guests who have had the pleasure of dining at our International Bistro in Forney, TX may have noticed that we NEVER place a straw in their drink. We do offer straws, but only upon request. Why? Read on…

Many would think that this is simply a cost saving strategy however, they would be entirely wrong. Straws are actually very inexpensive, but they cost us all down the line. There are actually two reasons for our “upon request only” policy. But first, a little history of the straw is in order.

The plastic straw is a simple tool originally designed to make drinking easier and “supposedly” hygienically safer. The first straws were made of rye grass. Produced naturally, they were, like most products produced before the 1900s, biodegradable.

Picked from the fields, the manufacturing process as described by the book The Small Grains was pretty basic; “After bleaching, the straws are assorted by hand, each individual stalk being examined, and the imperfect ones removed. They are then cut, the five lower joints only being utilized for drinking purposes. The sheaths are then removed, and the straw washed and bound into bundles ready for the market.”

Although widely used at their introduction, the problem with rye straws was twofold: (1) The straws affected the taste of the drinks and (2) they had a tendency to disintegrate into whatever beverage you were drinking.

The next iteration of the straw was the paper straw. Most baby boomers will remember the candy cane striped straw offered at their local malt shop. Although biodegradable, they had one serious problem. Made from paper and coated in beeswax, they didn’t negatively affect the taste of the beverage like rye straws, but they did eventually disintegrate in the beverages AND they were unable to stand up to thick shakes, malts and most recently slurpees. By the 1960s, along came the marvel of science, so popular that we continue to use them today in a multitude of shapes and sizes, the plastic straw.

But for Crumbzz, although it may be a marvel of science, the plastic straw harbors two negatives that are against everything we stand for.

If you noticed in the third paragraph of this post, we inserted the word “supposedly” when speaking about the sanitary benefits of drinking from a straw (versus drinking directly from a cup or glass). That is because multiple studies have shown, contrary to public opinion, drinking straws are actually LESS sanitary then drinking from the glass. This has to do with their storage and handling prior to use and the fact that most restaurants use sanitizers when washing dishes and glasses.

This doesn’t mean we should ban straws to prevent them from polluting the environment, but it’s clear we should carefully think about changing our drinking habits. Before you ask for that straw, remember that straw you use in your drink doesn’t biodegrade, and stays around forever, and usually ends up floating in the ocean, where it becomes a danger to all ocean living animals.

Now that you know it can actually be less sanitary than drinking from a glass, is it that much harder to drink your beverage from a cup or glass?

It doesn’t seem like a big thing but the world is changed by millions of little things and the problem with straws are that they’re so insignificant that we usually take them for granted. Perhaps we shouldn’t.